Are You Up-to-Date on the Newest SEO Trends?

Search engine marketing is changing by the day. With algorithms that update faster than can be reported on, the key to really successful SEO isn’t just reacting to changes (at least not all the time). What really drives SEO success is spotting the trends that these changes are indicative of, and building lasting campaigns and strategies to take advantage of them.

On March 26, 2018, Google announced that they are officially beginning to roll out mobile-first indexing. This system has been in testing for over a year and a half, and Google is finally confident that it is ready to implement.

So what is mobile-first indexing?

Well, with desktop-first indexing, Google sees your website’s desktop version as the primary site, and uses that content as the default to index. In the past, if there is a mobile version of the page or responsive site, that page gets a boost to their page rankings. Mobile-first indexing, however, uses the mobile version of your page as the default and only switches to your desktop version if you don’t have a mobile page.

Google provides a chart for determining exactly how this will impact your company – depending on the type of website that you have. ? 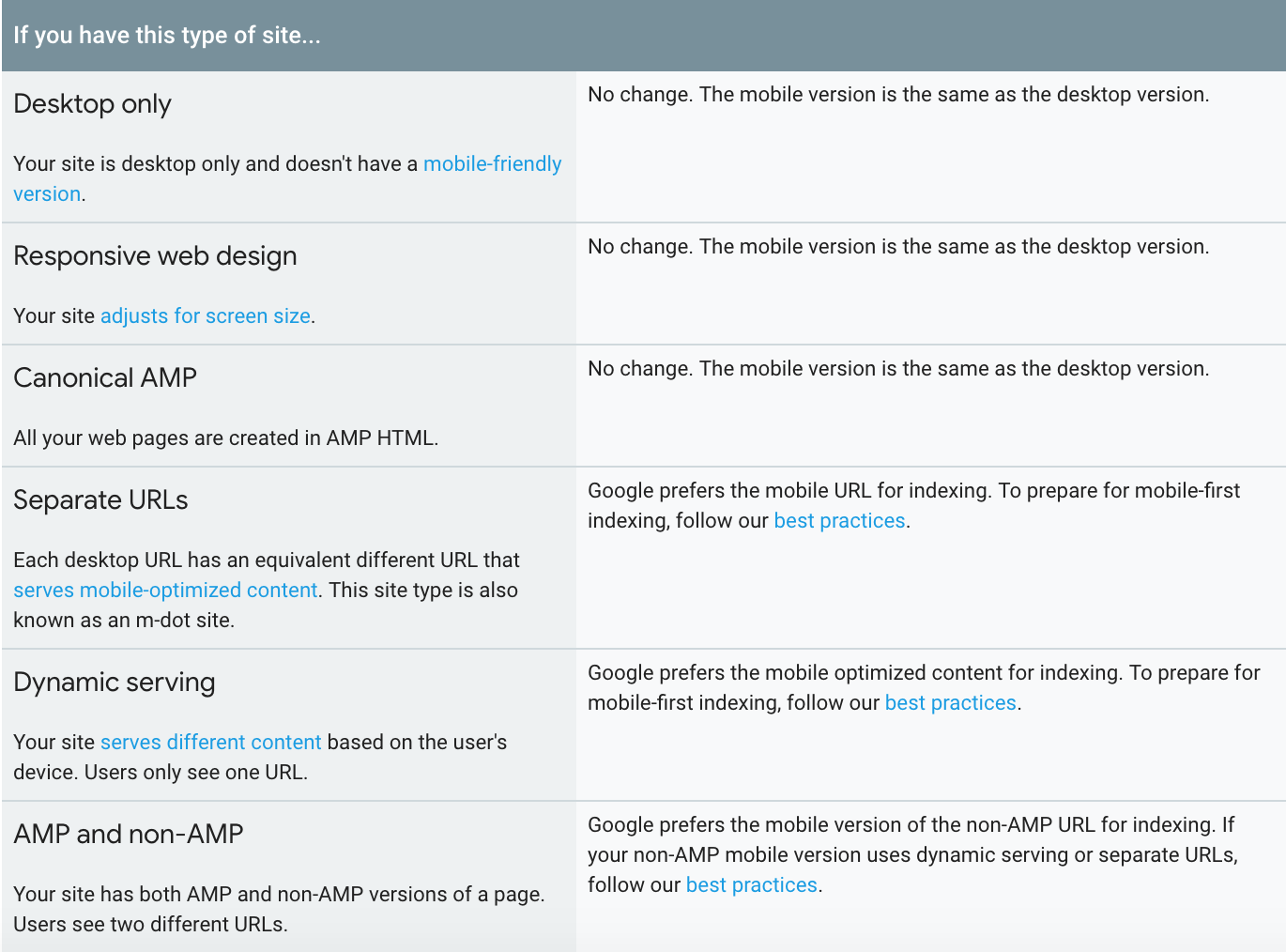 The good news is that if your business already has a responsive site, you shouldn’t expect to see any effects (positive or negative) from this specific change. However, even if you are better prepared for the mobile-first world than others, this change still has important implications for the future of SEO.

Here’s a helpful metaphor for the future from Google’s own Search Liaison twitter:

The lesson to take from the shift to mobile-first indexing is that whether or not your business is prepared for it, the future is mobile. Eventually, Google will be looking at mostly mobile pages – because that’s what customers for nearly all industries will be looking at (or are already).

Voice Search is on the Rise

Voice search has been on the rise for a long time, but mainly what’s been holding it back is a lack of sophistication.

Voice recognition is now significantly faster and more accurate than a human at producing text on a mobile device. This means that asking a question to your mobile device is actually faster than trying to type it in. Granted, search queries differ in length depending on whether or not they are typed or spoken, but more on that later.

There’s yet another voice recognition milestone that will be heralding major changes in SEO. Last year, Google’s speech recognition technology dropped to a 4.9 percent word error rate – making it on par with humans. The chart below demonstrates that progress.? 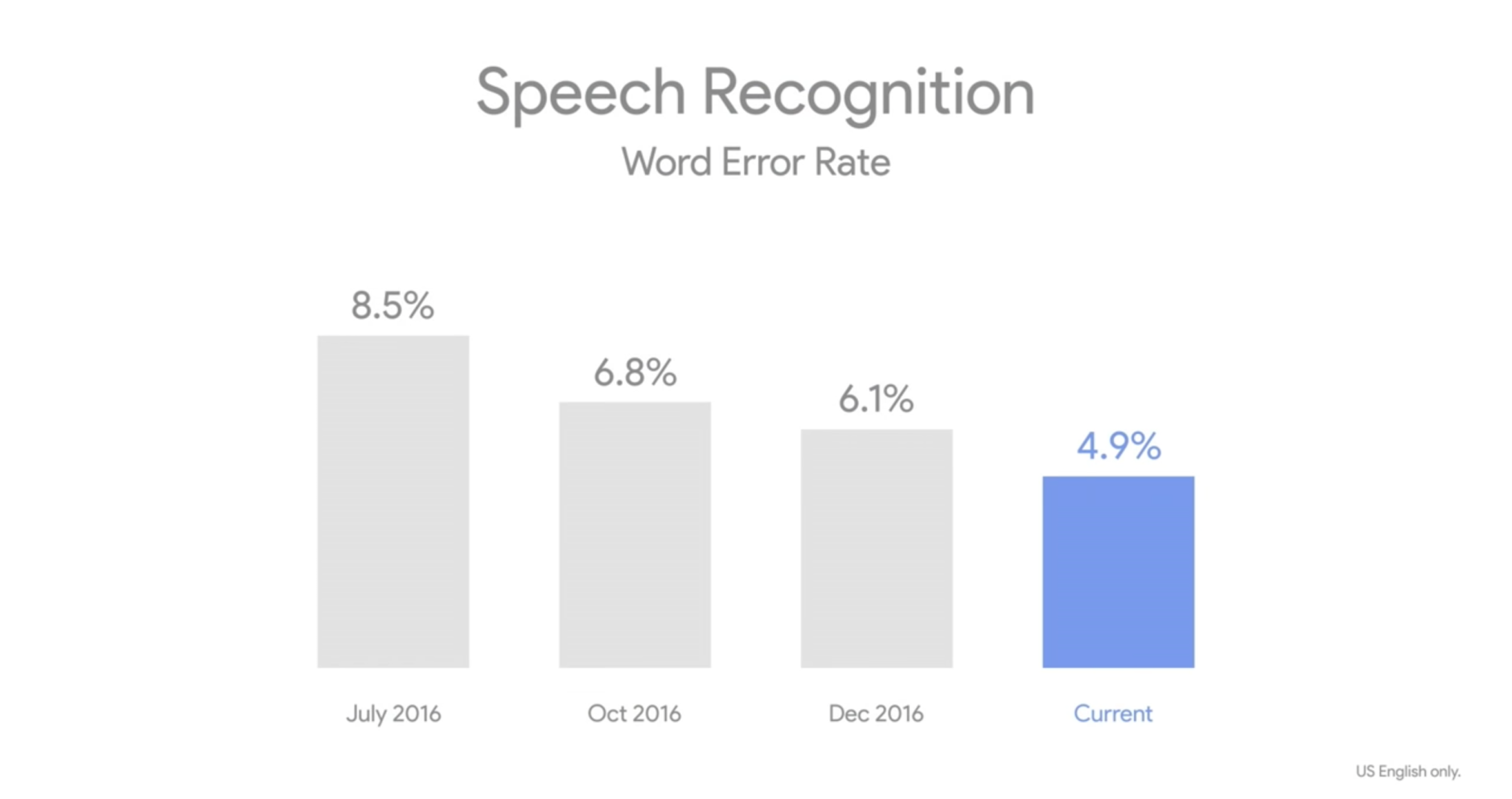 That’s a tremendous improvement in a very short amount of time – and indicative of how much investment is happening within Google (and other companies) in this technology.

Unsurprisingly, as voice recognition technology improves, voice search has been increasing. A recent study shows particularly fascinating differences between voice search in 2017 and 2018.

Not only is voice search growing in 2018, but consumers seem to be increasingly comfortable with using voice search in public spaces. Stone Temple’s study shows the places people use voice search – in 2018, almost all those numbers grew – except when alone. 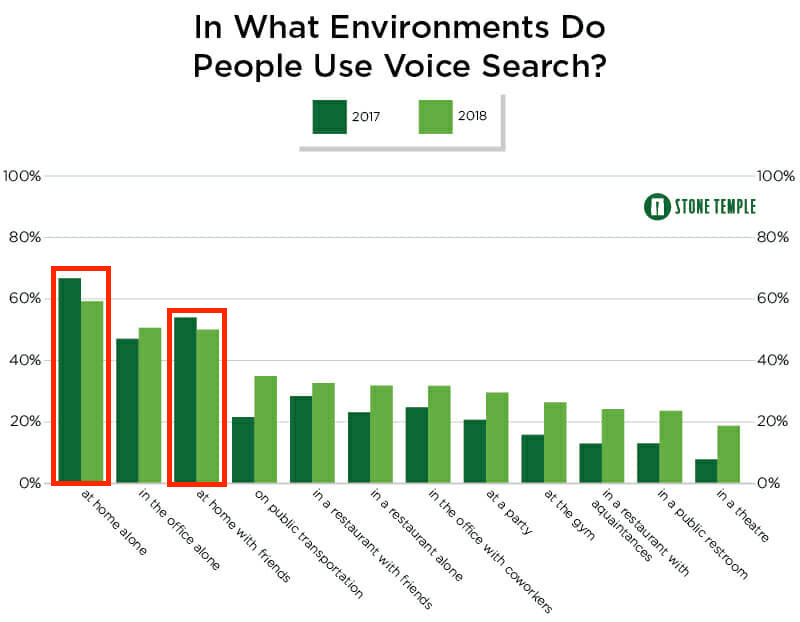 While 45% of people still report being annoyed by others using voice-search in public, it is undeniable that public voice-search is becoming more socially acceptable. Device popularity and convenience are winning people over and opening up voice search to be used beyond the home. Public acceptability is a hurdle that many new technologies and devices have had to conquer – particularly when they have such a profound social impact. It appears that 2018 is the year voice search begins to turn the tide.

An increase in voice queries means a few changes for SEO experts. ?

The first is to find out what content you should optimize for voice search, after all, some topics aren’t well suited to voice-search. When you ask a quick question, your goal is likely to receive a quick and helpful answer, hence, most of Google’s results for voice search are very short. The average is just 29 words. The best tactic is to keep your SEO voice-query-optimization efforts within that short-answer range. You should showcase the most useful, bite-sized pieces of information, not launch into an 88-page dissertation.

Second, be aware of the rise of conversational queries. We brought this up briefly before when discussing the advances in voice recognition. Though voice recognition tech can display a result faster than we can type it, that doesn’t mean people use the same phrases when speaking and when typing. Voice search tends to be in the form of a conversational query – longer queries with conversational syntax. For example, a user might ask the question “What’s the best place to go get tacos in Reno, Nevada?” when using voice search as opposed to typing in “best Reno tacos.”

One step Google is taking in this direction is Talk to Books – a newly developed demo tool by Google built to show off (and test) new AI that doesn’t rely on keywords at all to deliver results. Clearly, Google is interested in building AI with conversational understanding or capabilities – which will likely have impacts on SEO as voice search continues to grow.

It is well known that Google constantly updates their search algorithm. In fact, this process happens so frequently that announcements for each and every change simply aren’t efficient. However, there some large changes that are worth paying attention to.

On March 12, 2018, Google announced a “broad core algorithm update” – a change which has a broad (though not necessarily dramatic) impact. In this recent update, Google isn’t actually penalizing anything. This update focuses instead on rewarding previously underrated sites.

When they announced this change, Google also warned that because this update hasn’t penalized anything, there isn’t anything you can do to “fix” any drop in ranking your page may have experience. Your only option is to improve your content and wait for user experience to carry you up to higher rankings again. Check to see if your site has dropped in ranking – and if it has, it may be time to set a plan in motion to improve the information you are offering your visitors and the general user-friendliness of your site. ?

This is an important caution to pay attention to. It is not infrequent that updates to search engine technology change things that can’t be fixed – the only way to not be hit by them is to have the best, most relevant content. ?

As we move forward into 2018, keep alert for changes to Google’s algorithm that have impacts on your business’ SEO. With multiple minor changes daily and multiple yearly broad core updates, we can be sure that by the end of the year, SEO will have changed significantly.

The Trend Towards CX

Search engines (like Google) are built upon their users. Without a huge following of devoted users (and the advertisers that want to sell to them), search engines go the way of Yahoo.

The best way for a search engine to develop that following is to become an essential part of daily life. The search engine should be the source for immediate information. To do that, they have to deliver highly relevant, accurate, and helpful information in response to every single query.

So really, “customer experience” isn’t a ranking factor, it is what Google’s algorithm uses ranking factors try to try and approximate. The changes that have taken place so far in late 2017 and 2018 are all indicative of the larger industry-independent trend towards customer-centricity. ?Google and other search engines are getting better and better at providing that exceptionally relevant information to their user – it’s up to SEO professionals to make sure that their online experience is in the selection deemed most relevant for their target users.

Subscribe to our blog and get awesome updates and insights on a weekly basis. No Spam. No BS.